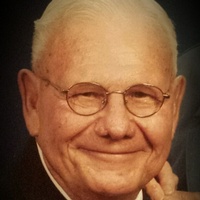 ALFRED CARL SCHREIBER, 92, of Paris, passed from this life Thursday November 6, 2014 at Brentwood Terrace, where he had been for a few brief days. Funeral services will be conducted at 3:00 p.m. on Sunday November 9, 2014 in the chapel of Starrett Funeral Home, with Rev. Steve Payne and Rev. Ben Reed officiating. Private burial will take place in the Long Cemetery in Powderly.


The family will receive friends at the funeral home for one hour prior to the service.

Alfred was born May 17, 1922 in Lewisville, one of the five children born to William H. and Lena Thiede Schreiber. He was a graduate of Lewisville High School, then attended North Texas Agricultural College. He was employed by Texas Power and Light Company for over forty-one years. He was a meter shop foreman, retiring in 1983. He was an Aggie to the nth degree. He was an avid gardener and loved to fish. He was a faithful believer and a member of Calvary United Methodist Church.

He married Clifford Payne on January 26, 1946 in Paris. After over sixty-eight years of marriage they were still love birds. This relationship brought them through the good times and bad, and love saw them through.

He was preceded in death by his parents; a sister, Hilda Sampert, and three brothers, Harold Schreiber, Willie Schreiber, and Egon Schreiber.


To order memorial trees or send flowers to the family in memory of Alfred Carl Schreiber, please visit our flower store.