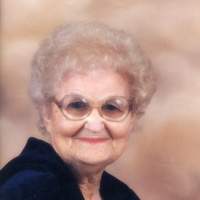 Alta was born June 21, 1919 in Lamar County, the only daughter of eight children born to Marvin and Nettie Chancellor Womack. She attended Lamar County schools, and was a member of Pathway International Church of God. She retired from the Dietary Department of the former McCuistion Regional Medical Center after some twenty-five years of service.

She married Joseph C. Robinson in 1940, who served in the U.S. Army and was killed during the invasion of Normandy in WWII. In 1946 she married Roy Hatfield in Lamar County, and he preceded her in death in 1995.

In addition to her husbands she was preceded in death by seven brothers; a grandson, Raymond Roy Robinson; and a great-granddaughter, Brandi Waggoner.

The family wishes to express their love and appreciation to the staff of Paris Healthcare Center for their tender care, especially Donna, Patricia, Bertha, and B.J.

To order memorial trees or send flowers to the family in memory of Alta Virginia Hatfield, please visit our flower store.