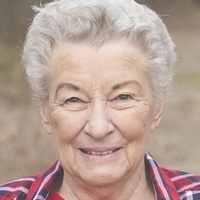 Betty Pratt, of Sumner, TX, formerly of Powderly, TX, went to be with her Lord and Savior, Jesus Christ, at her residence on May 4th, 2018. She was 81 years of age. Roden-Pryor Funeral Directors will conduct memorial services at 11:00 A.M. Friday May 11th, 2018 at Lamar Point Baptist Church with Rev. Brad Crosswhite officiating.
Mrs. Pratt was born on April 14, 1937, to Jim and Dorothy Davis in Canton, NC. She married Paul Pratt on June 15, 1968 in Pasadena, CA. He preceded her in death on May 12, 1999. She was also preceded in death by her parents and two brothers, Kenneth Davis and Thomas "Tommy" Davis, and three sisters, Shelby Eannarino, Evelyn Clark, and Helen Haynes; as well as a precious granddaughter, Megan Weissenmayer, who has been waiting for her Nana in Heaven.
Survivors include two daughters, Denise, and her husband, Karl Weissenmayer, Brenda and her husband, Jeremy Storey; five grandchildren (who could do no wrong in her eyes, and whom she spoiled beyond reason), Ariana, and her husband, Spencer Jones; Jacob and Paige Weissenmayer; Kaila and Cheyenne Brewster; one sister, Peggy and her husband, Dick Weeter, of Amarillo, TX; and a sister-in-law, Becky Davis, of Canton, NC. Extended family includes Rhonda and her husband, James Roberts; Rena and her husband, Mitch Clark, and their two children, Lauren Patterson and James Reed Clark; and a very special son-in-law, James Brewster, and his wife, Shauna, and their two children, Brayden and Ella. She is also survived by several nieces and nephews and lots of special God-sent friends. And a very special friend whom she thought of as another daughter, Stella and her husband, Hiram Jennings.
In lieu of usual remembrances, donations may be made to Lamar Point Baptist Church Youth Group, 5758 FM 1500, Paris, TX 75460.

To order memorial trees or send flowers to the family in memory of Betty L Pratt, please visit our flower store.