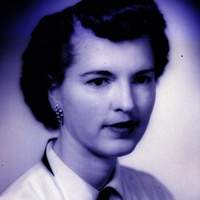 Following a visitation in Katy on Monday evening, the family will receive friends from 6:00 to 8:00 p.m. Wednesday at Starrett Funeral Home.

Mrs. Browning was born January 27, 1927 in Paris, a daughter of Rev. Elmer and Ruth Marie Medlock Dicken. She was of the Baptist faith. A graduate of Paris High School, she spent her early years working as a telephone operator for Southwestern Bell. Her preferred and longtime job was that of wife and mother and her greatest joy was spending time with her children and grandchildren. She loved to dance.

She married Martin Browning on September 18, 1949 in Paris.

She was preceded in death by her parents; an infant son, Ronnie Joe Browning; a sister, Emma Frances Rosenthal; and a brother, Robert Arthur Dicken.

To order memorial trees or send flowers to the family in memory of Billie Jo Browning, please visit our flower store.