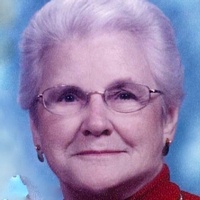 BILLIE BURTON BUSTER WORSHAM, 87, of Powderly, passed from this life on Wednesday July 8, 2015 at Paris Regional Medical Center. Starrett Funeral Home will conduct graveside rites in the tabernacle of Mt. Tabor Cemetery at 10:00 a.m. Saturday July 11, 2015 with Rev. Judi Brandt and Rev. Steve Cook officiating. There will be no formal visitation.

Billie was born February 29, 1928 in Lamar County, a daughter of Willie Edgar and Ethyl Annie Burton Buster. She attended Lamar County schools, then worked as a cashier for Sears-Roebuck in Houston, retiring after twenty-one years. Billie was a member of the Oak Park United Methodist Church in Paris. Billie was known for her excellent cooking, and amazing abilities as a seamstress. Most of all, she will be remembered as one who loved her family dearly, always putting them first. Her greatest joys were the times she could spend with her grandchildren.

She was preceded in death by a son, Billy Roy Cunningham; by three brothers, Horace Buster, Weldon Buster, and Jack Buster; and by two sisters, Lee Hammond and Mary Kropp.

To order memorial trees or send flowers to the family in memory of Billie Worsham, please visit our flower store.