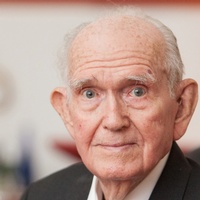 The family will receive friends from 6:00 to 8:00 P.M. Thursday December 8th at the funeral home.

Elmer (as he was known to friends) was born on November 21, 1919 in Randolph, Texas to George Elmer L'Roy and Mollie Cain L'Roy. He grew up in Durant, Oklahoma. He graduated from Russell High School and attended Oklahoma State University to become a chemical engineer. In 1939, two momentous events happened that changed his life forever. He met Judy Fay Neely and fell in love at first sight, and a mentor asked him to preach a sermon at a little church outside of Durant. He always said he was scared at the prospect so he decided to preach on "Faith." He soon decided to dedicate his life to Christian ministry and he wanted to marry Judy. So, their partnership and journey together began on December 27,1939. Judy passed away in 2004 at the age of 84. She is buried near Durant, Oklahoma where both were raised.

While in Arlington, Elmer was actively involved in the founding of the World Bible Translation Center which produced the first English Bible for the Deaf and now has grown to translations in more than twenty languages.

His children say that his greatest gift was his love of people. "Dad looked for the good in each individual and was always ready to give a helping hand to anyone. He was supportive, positive, and not judgmental. He always took time to listen. He had compassion on those who needed help."

He and Judy opened their home where all were welcome and there was always laughter and good food. He loved Christmas and Thanksgiving with the family. He loved the farm. He was "Pa" to his grandchildren and great-grandchildren. He had a keen sense of humor and loved a good joke even if it was on him. He celebrated his ninety-seventh birthday party in his hospital room. He shared his birthday cakes with family, friends, nurses, and anyone else who walked down the hall with his own special brand of charm and generosity.

Farewell good and faithful servant until we all are reunited. Lux Aeterna.

The family requests that memorial contributions be made to the Timothy Lloyd Kelley Scholarship Fund, 1204 31st, Hondo, TX 78861, or a charity of your choice.

To order memorial trees or send flowers to the family in memory of Bro Elmer A L&#39;Roy, please visit our flower store.