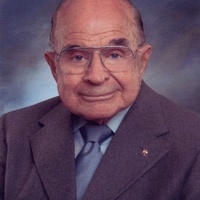 CECIL A. FARRELL, JR., 91, of Houston, passed from this life Wednesday, March 23, 2011 at his residence in Houston, Texas. Starrett Funeral Home is in charge of Masonic graveside rites at 10:00 a.m. Saturday April 02, 2011 at Evergreen Cemetery, with Rev. Dan Craig officiating.

Mr. Farrell was born September 24, 1919 in Paris, a son of Ora Dunlap and Cecil Alexander Farrell, Sr. He was a 1936 graduate of Paris High School, then graduated from Paris Junior College. In 1952 he graduated from the University of Texas in Austin with a degree in Engineering. He was a fifty year plus member of both Shriners International and the Bay City Masonic Lodge #865. He was also a member of the Ruthven Commandery #2 Knights Templar. He was an active and recognized member of the Boy Scouts of America. Cecil was a distinguished alumnus of Paris Junior College, and is celebrated on their Wall of Honor.

Survivors include a son, Cecil Allan Farrell and daughter-in-law Alicia, of Houston.


To order memorial trees or send flowers to the family in memory of Cecil A Farrell Jr, please visit our flower store.