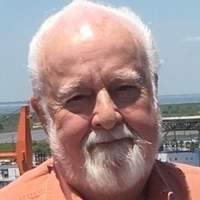 Chester Earl Flenniken, age 77 years, passed away at home in Powderly, Texas on May 15, 2017, surrounded by his family. Roden-Pryor Funeral Directors have been entrusted with cremation arrangements.

Mr. Flenniken is survived by his wife of 9 years, Carolyn Lay Flenniken; his daughter, Michelle Flenniken Parker, and her husband, Lance Parker; his daughter, Melanie Flenniken, and her wife, Kyndal Flenniken; grandchildren Dakota Parker, Kaitlyn Parker, and Reilly Parker; his stepson, Jeremy Newberry, and his children, Karli and Jerron Newberry; his stepson, Chad Newberry, and his children, Zachary and Kaitlyn Newberry; his silbings, Elizabeth Lakin, Boyce Flenniken, and Phebe Allen; numerous cousins, nieces, nephews and many other relatives and friends.

He is preceded in death by his wife of 34 years, Jerline (Jerri) Irvin Flenniken; his wife of 8 years, Joan Kincaid Flenniken; his parents Earl and Dora Flenniken; his brothers Charles Flenniken and Billy Flenniken.
Mr. Flenniken graduated from Bogata High School in 1958 and went on to Baylor Medical School to earn a certificate in Radiologic Technique. He became a Registered X-ray Technologist in June of 1960.

He was a member of the Army Reserves from 1963 to 1968, posted for a time at Fort Sill in Oklahoma, Fort Bliss in Texas, Fort Lewis in Washington State and Fort Polk in Louisiana. While in the Army Reserves he received his certification in X-ray Procedure from the Brooke Army Medical Center in Fort Sam Houston, Texas.
He first retired from St. Joseph's Hospital in Paris, Texas after 33 years of service but continued to work off and on the X-ray field at several local hospitals, including Choctaw Memorial in Hugo, Oklahoma.

He was the best husband, father, brother and friend a person could ask for.

According to Mr. Flenniken's last wishes, he will be cremated and no funeral or memorial service will be held.

Mr. Flenniken's family extends heartfelt thanks all his friends and relatives, past and present, who visited with him during his illness at home and in the hospital.

To order memorial trees or send flowers to the family in memory of Chester Flenniken, please visit our flower store.