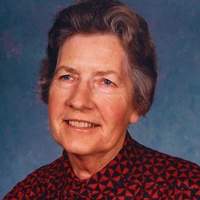 CLARA HOLMES MILLER, 94, formerly of Paris, passed away May 3, 2011 in Edmond, OK, where she had been a resident of the Copperlake Retirement Center since January, 2001. Funeral services will be conducted at 10:00 a.m. Saturday May 7, 2011 in the chapel of Starrett Funeral Home, with Hershel Mercer of Dade City, Florida, officiating. Interment will follow in Providence Cemetery.

The family will receive friends from 6:00 to 7:00 p.m. Friday at Starrett Funeral Home.

She was an active member of the Seventh-day Adventist Church in Paris before moving to Oklahoma. She also participated in various other organizations associated with the hospitals in Paris, as well as numerous senior activities. She was a faithful Christian and devoted wife, mother, grandmother and great grandmother to her family. As a housewife, she spent many hours in her flower gardens, for which she attracted much attention.

The daughter of Sandy H. Holmes and Emmie Lee Woodby Holmes, she was born and reared in Lamar County, where she lived until her health failed in 2000.

To order memorial trees or send flowers to the family in memory of Clara Miller, please visit our flower store.