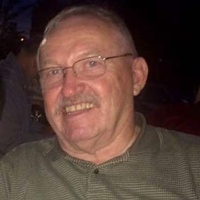 DENNIS "DENNY" DALE BARLOW, age 66, passed away on Saturday afternoon October 17th, 2015 after a motorcycle crash on one of the "Three Sisters" ranch roads Route 336 in Bexar County. A memorial service will be conducted at 1:oo p.m. Sunday October 25, 2015 in the chapel of Starrett Funeral Home with Rev. Judith Brandt officiating.

Denny was born January 17th, 1949 to Dale and Doris Barlow at St. Joseph's Mercy Hospital in Mason City, Iowa. He attended and graduated from Clear Lake High School c/o 1967. Three weeks after his High School graduation, he enlisted himself in the U.S. Army and was deployed to Vietnam. In 1970 he was honorably discharged and moved to Tucson, Arizona. Denny obtained his Associates of Applied Science at Pima Community College in 1984. He then moved to Osaka, Japan in 1984 and taught English at Soka High School for four years. In 1989, Denny moved back to Seattle, Washington for a year, then moved again to Portland, Oregon where he worked for Fujitsu, as a Field Service Engineer. He also worked for Althin Medical as a Field Service Engineer, where he fixed kidney dialysis machines. In 2003, he started his own business, "DBSolutionsNW" where he worked as a consultant for Software Configuration Management in IT departments to various companies including USAA. That same year, Denny moved to San Antonio, Texas. In 2009, he started to work for Information Innovators Inc.

Of all Denny's many travels his favorite destination was Australia and even had dreams of retiring there. He enjoyed many hobbies and activities such as singing, gadgets, playing racing video games, skydiving, even the occasional TV Suspense/Drama or NASCAR Races. His absolute passion was to ride "Roxanne" ... his beloved Harley.

To order memorial trees or send flowers to the family in memory of Dennis Dale Barlow, please visit our flower store.