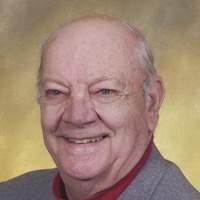 DEWEY LEE WOODARD, 80, passed away at the Medical Center of Plano on Monday June 9, 2014. A funeral service to celebrate his life and honor his memory will be conducted at Starrett Funeral Home at 2:00 p.m. Thursday June 12, 2014, with Rev. Bill Coleman officiating. Following the service his body will be laid to rest at Evergreen Cemetery.

Dewey was born December 14, 1933 in Minter, Texas, a son of Talma Buford and Jennie Fay Thompson Woodard. He was one in a family of six children, attending school and graduating from Deport High School in 1951. He served his country honorably in the U.S. Army from 1954 to 1956, being stationed in El Paso, Texas and at Esslingen Kaserne, near Stuttgart, Germany. In 1953 he married Alice Bacon in Lovington, New Mexico, and for the next ten years the made their home in Kermit, Texas as Dewey worked for the Kermit Motor Company, developing a lifelong love for cars. In 1963 the young Woodard family moved to Paris, where he owned and operated the family business, Woodard Exxon for the following forty years. Closing the business in 2003, his was the distinction of owning the last full-service station in Paris, truly the end of an era. Following retirement he continued to buy and sell antique cars and enjoyed membership in the Red River Valley Honkers club, and more recently in the Road Runners Car Club. He was never happier than when he and Alice took to the open road in one of his vintage automobiles.

Preceded in death by his parents, he had also seen four brothers and a sister depart this life: Ray Woodard, Gordon Woodard, T.L. Woodard, Paul Woodard, and Marybelle Igo.

He was fair in his business dealings, truthful in his character, looked for the best in every person whom he met, and lived by the Golden Rule. His departure leaves the world a poorer place, but the lives he touched have been made richer from knowing the man who was Dewey Woodard.

To order memorial trees or send flowers to the family in memory of Dewey Lee Woodard, please visit our flower store.