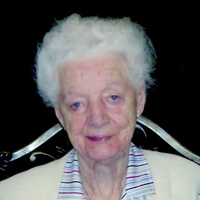 EDITH DAVOUST, 101, of Sumner, passed from this life Wednesday February 29, 2012 at the home her grandson Steven. Private graveside rites were conducted on Thursday March 1, 2012 in the Pyles Cemetery, under the direction of Arvin Starrett and Marcus Roden of Starrett Funeral Home.

Edith was born October 19, 1910 in Tacoma, Washington, a daughter of Fred and Martha Dowse Nelson. She married George Davoust in 1940 in Seattle, and he preceded her in death in 1993.

To order memorial trees or send flowers to the family in memory of Edith Davoust, please visit our flower store.