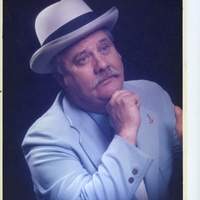 GENE RADER, 88, of Paris, fell asleep in this world on Saturday October 4, 2014, and awakened to Heavenly glory from his room at Spring Lake Assisted Living Center. Funeral services will be conducted at 2:00 pm Wednesday October 8, 2014 in the chapel of Starrett Funeral Home, with Dr. Tommy Turner and Rev. Ken Cannon officiating. Interment will follow in Evergreen Cemetery.

Born in the Caviness community of Lamar County to C.O. and Ella Mae Jetton Rader on July 19, 1926, his was a life of the hard work of a cotton picker ("the Glory Flash," as he described himself), the owner and promoter of several successful business ventures, and to appearances in fourteen feature films, including "The Sugarland Express," "Honeysuckle Rose," "Liar's Moon," and "Close Encounters of the Third Kind." These achievements led him to an appearance on "The Tonight Show, with Johnny Carson," in 1986. He will be fondly remembered as "The Cut Price King," a title from his successful business, Gene the Jewelers and Bridal, which he opened in 1953 in downtown Paris, operating it alongside his wife, the former Dorothy Hendley. They shared over sixty-three years in marriage before her death on June 8, 2009. He was the owner of Gene's Flea Market in Paris, and found further success in real estate ventures. Gene was not just a successful entrepreneur, but was a man who dedicated his life to his faith, family, and community. He was a man who led by example, teaching others by his dedication, zeal for hard work and service to others, and his love for God. He spent many years working with the Paris Noon Optimists Baseball program, attended First Baptist Church of Paris, and enjoyed the sport of fishing, holding several State records. He once remarked, "If I could have given up fishing and gone into movies, I would have been a big star." Those who knew Gene would agree. Gene left but two things of eternal importance behind when he gently left this earth: a good name, and positive impact on all the souls touched by his life. He loved his community of Paris and Lamar County and spent a lifetime sharing jokes, his upbeat attitude, and his eternal optimism with everyone he met. He was preceded in death by his sweet wife Dorothy; and by four sisters and two brothers.

He is survived by a son, Randy Rader and wife Jana; five grandchildren, Jaxon and Jacy Rader, Megan, Hunter, and Kylie Schroeder; a nephew, Terry Don Rader; a niece, Betty Strickland; as well as a host of friends and extended family.

The book of Wisdom teaches that "A man's gift maketh room for him, and bringeth him before great men." Gene's talent and ability took him into the presence of the celebrated and noteworthy throughout his life, but his greatest appearance took place on Saturday evening, when he found himself in the presence of his Lord. His final act was most certainly his finest.

To order memorial trees or send flowers to the family in memory of Gene Rader, please visit our flower store.