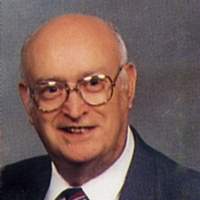 Gyles was born November 8, 1916 in Choctaw County, Oklahoma, a son of Edwin James and Della Spangler Norwood. In 1934 he graduated from Soper High School, then attended Paris Commercial College. He worked for the Southland Cotton Oil Co. in Paris from 1937 to 1946, during which time he served two years in the U.S. Navy in the Pacific during WWII. In 1946 he joined the staff at Paris Milling Company, where he worked for the following decade, prior to establishing the Norwood Bookkeeping and Tax Service in 1957. He retired in 1990. Gyles was a member of First United Methodist Church, where he served as a teacher in the Junior and Senior High departments, was a former member and Secretary of the Official Board, a former church Treasurer, and former member of the Couples Class and Golden Rule Class. He was a member of the Texas Association of Public Accountants, the National Association of Public Accountants, and the Texas Association of Enrolled Agents. He was a member of Paris Masonic Lodge # 27, Paris Commandary #9 Knights Templar, the Paris Elks Lodge and the Lamar County Chamber of Commerce. He was a former member and past-president of both Paris Jaycees and the Paris Kiwanis Club, for which he served as District Ki-Notes Editor in 1957. He served as secretary of the Board of Regents of Paris Junior College from 1955 through 1959 and on the Board of Trustees of the Paris Independent School District from 1959 to 1962. For many years he served as Treasurer of the NeTseo Trails Council of the Boy Scouts of America, and was a former member and secretary-treasurer of both the Paris Golf and Country Club and the Gordon Country Club.

He married L. Duaine Cross in Paris on June 9, 1940 and she preceded him in death on October 28, 2000. He was also preceded by his daughter-in-law, Patricia P. Norwood; by two brothers, Howell E. Norwood and J. Leonard Norwood; and by two sisters, Ophelia N. Hawkins and Marie N. Midtbo. He lived with his son and daughter-in-law in Virginia since 2002 and attended The Presbyterian Church of Fredericksburg, Virginia.

Survivors include his son, Gyles Richard Norwood, of Spotsylvania, Virginia; a grandson, Richard Kyle Norwood and his wife Kathryn, of Wilmington, North Carolina; and by four nephews and three nieces.

To order memorial trees or send flowers to the family in memory of Gyles D Norwood, please visit our flower store.