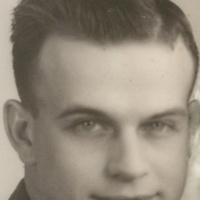 HERMAN ARTHUR BRIGGS, 91, of Paris, passed from this life Saturday December 12, 2015 at Paris Regional Medical Center. Funeral services will be conducted at 10:30 a.m. Tuesday December 15, 2015 in the chapel of Starrett Funeral Home with Rev. Doug Holt officiating. Interment will follow in Meadowbrook Gardens.

Mr. Briggs was born January 2, 1924 in the Tigertown community of Lamar County, a son of James Alvin and Margie Ethel Burrow Briggs. He was a graduate of Lamar County schools, then served his country honorably in the U.S. Army during World War II with an infantry division and was a squad leader of a mortar platoon in the Battle of the Bulge. He retired from Shell, Inc. in Deer Park, Texas, where he worked in the chemical industry. He was a faithful member of the Paris Church of God. He loved music and enjoyed playing the steel guitar.

To order memorial trees or send flowers to the family in memory of Herman Arthur Briggs, please visit our flower store.