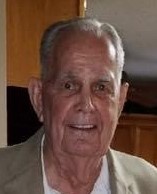 Hugh was born Hugh Elton Anthony on February 11, 1927 in Hanna, Oklahoma to George and Cleo Green Anthony.  Hugh spent his childhood in Hanna as well as in Las Cruces, New Mexico.  In 1948, Hugh married Nellie Jean Parker.  Hugh and Jean moved from Oklahoma to Arkansas and eventually made a home in Paris, Texas in 1962.  Hugh was an entrepreneur and successfully founded/purchased and sold over 48 businesses in his lifetime.  The Hickory House, Anthony Signs and Texas Furniture & Appliance are just a few of the successful companies that Hugh owned.  Hugh was a hard worker his entire life and worked full time well into his late 80s.  He loved being outside, raising cattle and maintaining his land in Lamar County.

Hugh was a long-time member of Lamar Avenue Church of Christ in Paris.  He loved his church family and looked forward to Sunday services.  Hugh was a family man and was loved by many.

Hugh was preceded in death by his parents, George and Cleo Anthony, his eldest son Hugh Bradley Anthony and his wife of 71 years, Nellie Jean Anthony.

He is survived by his son Jay Anthony and wife Kristi of Sumner, Texas; his daughter Paula Anthony and her husband Michael of Watts, Oklahoma; 8 grandchildren and 10 great-grandchildren. In his later years, his grandson Chris Anthony and wife Holly cared for Hugh with great selflessness.  Hugh had many people that loved and respected him, and he will be missed dearly.

Funeral services will be held on Wednesday August 26, 2020 at 11:00 am at the Lamar Avenue Church of Christ under the direction of Roden Pryor Funeral Directors. John Cannon will officiate. Front entrance only of the church will be open. Burial will follow in the Evergreen Cemetery at 2:00 pm.

The family will receive friends on Tuesday from 6 to 8 pm. at the funeral home.

To order memorial trees or send flowers to the family in memory of Hugh Anthony, please visit our flower store.