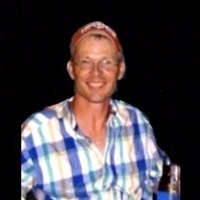 
JAMES BAD BRAD' BRISCOE, 43, of Paris, fought his final battle and entered into eternal peace on Sunday August 17, 2014. His friends and family will gather to honor and remember his life at 11:00 a.m. Thursday August 21, 2014 in the chapel of Starrett Funeral Home with Rev. Chad Lamb officiating. Following the service he will be buried beside his mother and father in Long Cemetery.

Brad was born September 30, 1970 in Paris, a son of James Walter and Elizabeth Gale Smyers
Briscoe. He attended North Lamar schools, and received a B.S. in Business from Texas A & M University, Commerce. Brad was the ultimate survivor, having suffered a traumatic automobile accident shortly after high school. Brad was given two choices: to survive or succumb; he chose the former, but not like the average man. It was not enough to survive; he chose to achieve. The expression, "given lemons and making lemonade" was the example he set. He was a teacher; not only in the real sense of his substitute teaching at North Lamar Schools, but in his life. He taught all who knew him the importance of perseverance and determination. Brad had a keen sense of humor, and never met a stranger. He will be remembered for his love of drag racing, poker, and casinos. Most of all, he will be remembered for the lessons of life that he demonstrated to all.

He was preceded in death by his grandparents, Jack and Mary Katherine Briscoe and Laverne and Milburn Smyers, and by his beloved parents, Jim and Gale Briscoe.

If desired, memorial contributions may be made in Brad's honor to the American Diabetes Association, 1701 North Beauregard Street, Alexandria, VA 22311 www.diabetes.org .

Friends may register in Brad's Book of Memories at www.starrettfunerals.com .

To order memorial trees or send flowers to the family in memory of James Bradley "Brad" Briscoe, please visit our flower store.