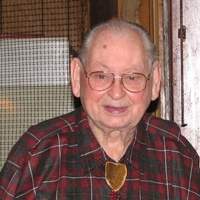 The family will greet friends from 11:00 a.m. until noon at the funeral home.

Mr. Conder was born August 25, 1919 in Powderly, a son of James Andrew and Mary Josephene Weaver Conder. He attended Powderly schools, then served in the Air Force in WWII with the 8th Air Force in England until his discharge in 1945 with the rank of Staff Sergeant. He was a bookkeeper, and a member of Trinity United Methodist Church in Waco.

In addition to his beloved wife, he was preceded in death by an infant son, Andrew Conder.

To order memorial trees or send flowers to the family in memory of James Odell Conder, please visit our flower store.