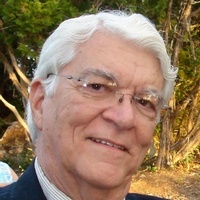 JAMES (JIM) ELMER RHEUDASIL, 79, former resident of Paris, Texas, Shreveport, Louisiana, Dallas, Texas and Tyler, Texas died Tuesday, January 17, 2012, in Atlanta, Georgia where he had lived for the past six years. Family and friends will gather at Starrett Funeral Home in Paris at 1:00pm, Sunday January 22, 2012. Patrick Cannon will officiate for a graveside service at 2:30 pm at the Little Vine Cemetery near Sumner, Texas, where he will be buried in a family plot.
Mr. Rheudasil is a descendant of a Texas pioneer family who settled in the Sylvan, Texas area in 1853. Jim was born April 13, 1932, son of Elmer Cavnar Rheudasil and Nona Jane Miller Rheudasil, both of Paris. His early childhood was spent in Paris until his family relocated to the Shreveport, Louisiana area at the beginning of World War II, where his father worked in the defense effort. Jim grew up in the Church of Christ and attended Harding College in Searcy, Arkansas. He married Norma Jean Robinson of Shreveport, Louisiana. Jim and Jean had three children in Shreveport before relocating to Dallas, Texas where Jim spent most of his career as an architect. He also spent time living and working in Munich, Germany and Kaneohe, Hawaii. He retired in 1992.
He is survived by his wife of 56 years, Jean, of Atlanta, Georgia, and his three children, Dr. James Mark Rheudasil of Atlanta, Georgia, Paul Alan Rheudasil of Phoenix, Arizona, Leslie Elizabeth Rheudasil Sewell of Atlanta, Georgia, and five granddaughters.
In lieu of flowers, donations can be made to the Alzheimer's Association.

To order memorial trees or send flowers to the family in memory of James Elmer Rheudasil, please visit our flower store.