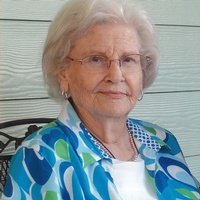 LAURA JEAN BELL GIBSON, 88, of Paris, passed peacefully from this life on Sunday, October 19, 2014 at Paris Regional Medical Center. Starrett Funeral Home will conduct funeral services at 1:30 p.m. Wednesday, October 22, 2014 at Lamar Avenue Church of Christ, with Patrick Cannon officiating. Jean will lie in repose at the church from 10:30 a.m. until service time, as the family will receive friends from 10:30 a.m. until noon. Interment will follow in Evergreen Cemetery.

Jean was born October 5, 1926 in Lamar County, the seventh and last child of Fred and Rosa Mae Harbert Bell. Her passing marks the end of a known and respected family in Lamar County history. She attended Paris Junior College and North Texas State Teachers College, and was a longtime member of the Lamar Avenue Church of Christ.

Jean married Charles Felix ("Hoot") Gibson on December 26, 1945, enjoying 60 years of togetherness until his death on January 9, 2006. Jean's life was one of dedication to others, whether it was through her church or through numerous civic organizations including, among others, St. Joseph's Hospital Auxiliary, Paris Public Library, King's Daughters, Paris Garden Club, Round Table and the Latchkey Program of Lamar Avenue Church of Christ. She was recognized as a Paul Harris Fellow by the Rotary organization and diligently served along with Hoot during his tenure as a Rotary District Governor during 1996-1997. Jean and Hoot enjoyed their lives together in Paris and that included many evenings playing Bridge with their friends. In her later years she enjoyed playing dominos (42 was her favorite) with her friends at the Spring Lake Assisted Living and Memory Care facility where she resided at the time of her death.

In addition to her husband, she was preceded in death by an infant son, Walter Frederick Gibson; by a son, Chuck Gibson, in February 2004; and by her six siblings, Freddy Bell, Paul Bell, Rayburn Bell, Walter Bell, Nadine Bell Leverett and Mary Bell Hodges.


To order memorial trees or send flowers to the family in memory of Jean Jean Gibson, please visit our flower store.