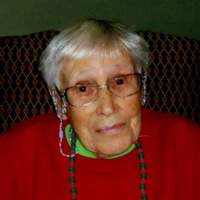 MARY LOUISE KING, 97, of Paris, passed from this life
Thursday December 5, 2013 at Paris Regional Medical Center. Funeral services will be conducted at 2:00 p.m. on Friday December 13, 2013 in the chapel of Starrett Funeral Home with Rev. Jack Graham officiating. Interment will follow in Evergreen Cemetery.

The family will receive friends from 6:30 to 7:30 p.m.Thursday at the funeral home.

Louise was born May 24, 1916, in Quannah, Texas, a daughter of Robert Claude and Hortense Marie Ward Roddy. She completed high school in Minter, Texas, then went on to a lifetime of work as a seamstress, and her more important work as a wife and homemaker. She married James Earl King on October 22, 1938, and he preceded her in death on March 14, 2000.

In addition to her husband James she was preceded in death by a sister, Claudia Marie Bowman, and by two brothers, Joe Doyal Roddy and John Em Roddy.

To order memorial trees or send flowers to the family in memory of Louise King, please visit our flower store.