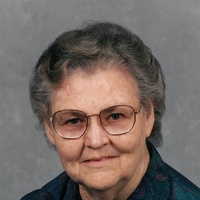 LUCILLE RUSSELL SANDERS, 93, of Paris, left this earth to be with her Lord and
Savior on Monday June 27, 2016 at Stillhouse Rehabilitation and Healthcare Center. Funeral services will be conducted at 11:00 a.m. Wednesday June 29, 2016 in the chapel of Starrett Funeral Home, with Rev. Mark Sanders and Rev. Kelly Adams officiating. Interment will follow in Evergreen Cemetery.

Lucille was born September 17, 1922 in Reno, a daughter of Hurvey and Laura Upchurch Russell.
She attended Lamar County schools and was raised to learn well the attributes of hard work and determination, and the importance of serving others. In whatever capacity she found herself, whether gardening, quilting, sewing, or simply helping others in need, she tirelessly gave it her best, reaping the rewards of beautiful flowers, fine quilts, and enduring friendships and love that will last for eternity.

On December 20, 1947 she married Oran Sanders, creating a family and making memories for twenty-seven years, before his death on June 28, 1974. In addition to Oran, she was preceded in death by her parents; three brothers, Lewis Russell, Robert Russell and Wallace Russell; and by two sisters, Grace Cunningham and Margaret Scott.

To order memorial trees or send flowers to the family in memory of Lucille Russell Sanders, please visit our flower store.