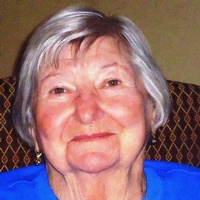 MARCELLA VARNER MATNEY, 78, of Paris, passed from this life Friday March 7, 2014 after a brief illness. Funeral services will be held at 11:00 a.m. Monday March 10, 2014 in the chapel of Starrett Funeral Home, with Rev. Mike Fortenberry and Rev. Jerry Moore officiating. Private interment will follow in Mt. Tabor Cemetery.

Marcella was born May 7, 1935 in Paris, a daughter of William E. and Rebecca Rosson Varner. She graduated from Powderly High School, then attended Lamar Business College. She worked for Superior Switchboard for twenty-seven years, then later in life was a clerk in BoMart for four years before retiring. She was a member of East Paris Baptist Church. She married James Billy "Bill" Matney on March 15, 1958 and he preceded her in death in 2000.

In addition to her husband, she was preceded in death by two brothers, Alvie Varner and Marvin Varner; and two sisters, Mable Patterson and Sarah Boren.

She is survived by two sons, Steve Matney and wife Mary, of Quanah, and Keith Matney and his companion Susan Sanchez, of Paris; and a very special granddaughter Mallary Matney, of Paris; a sister, Ollie Varner, of Paris; and numerous nieces and nephews, including Reva Bolton, of Paris.

If desired, memorial contributions may be made to the Mt. Tabor Cemetery Association, P.O. Box 13, Sumner, Texas 75486.

To order memorial trees or send flowers to the family in memory of Marcella V Matney, please visit our flower store.