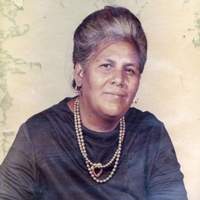 MARIA REBECA ACEVEDO, 88, of Paris, passed from this life at her residence on Saturday September 11, 2010. A Mass of Christian Burial will be conducted by Starrett Funeral Home at 10:00 a.m. Tuesday September 14, 2010 at Our Lady of Victory Catholic Church with Rev. Fr. James Rowland and Rev. Fr. Joseph Lobaton as celebrants. Interment will follow in the Union Grove Cemetery.

A vigil service and visitation will be held at 7:00 p.m. Monday September 13, 2010 at Starrett Funeral Home.

Maria was born February 25, 1922 in McAllen, a daughter of Santiago and Genovea Galvan Barrera. She was a homemaker and a member of Our Lady of Victory Catholic Church.

She married Ezequiel Acevedo on December 19, 1941 in Edinburg. He preceded her in death on February 4, 2002. In addition to her husband she was preceded in death by a daughter, Juanita Graham; a son, Ezequiel Acevedo, Jr.; and by two brothers and one sister.

To order memorial trees or send flowers to the family in memory of Maria R Acevedo, please visit our flower store.

Our Lady of Victory Catholic Church