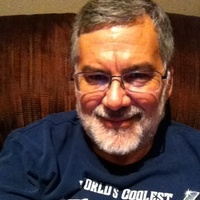 MARK STEVEN FLETCHER, 58, of Paris, left this earth for Heaven on Thursday June 4, 2015 from his
residence, where he was surrounded by his loving family. Funeral services will be conducted at 2:00 p.m. Friday June 12, 2015 in the chapel of Starrett Funeral Home with Rev. Tommy Turner officiating. Burial will follow in Evergreen Cemetery. The family will receive friends from 6:00 to 7:00 p.m. Thursday at the funeral home.

Mark was born June 26,1956 in Defiance, Ohio, a son of Philip Bernier and June Alexandria Moore Fletcher. His family moved to Paris in 1964, where he graduated high school,then attended East Texas State University in Commerce, where he graduated in 1978 with a Bachelors of Business Administration degree. Following, he spent a career of almost thirty years as a waste water operator for the City of Paris.

He married Anita Girard on August 2, 1986 in Paris. She survives.


Friends may register in Mark's Book of Memories at www.starrettfunerals.com.

To order memorial trees or send flowers to the family in memory of Mark Fletcher, please visit our flower store.