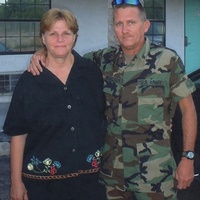 NORMAN EUGENE NICHOLSON, 57, of Paris, passed from this life Friday April 3, 2014 at the V.A. Medical Center of Dallas. The family will receive friends from 2:00 to 3:00 p.m. Sunday April 6, 2014 at Starrett Funeral Home, and immediately following the visitation will process to Restland Cemetery of Roxton for a graveside service, with special tribute from the Patriot Guard. Rev. Edgar Clements will officiate.

Norman was born October 10, 1956 in Austin, a son of Dorvel and Juanita Barr Nicholson. He was a graduate of Crockett High School in Austin schools, then entered a lifelong career in military service. He served the U.S. Army Reserves on Camp Maxey, and retired as a Supply Specialist for the Texas National Guard, giving twenty nine years, three months and one day of service to the country he loved. He received numerous medals and commendations, including the National Defense Service Medal, the Afghanistan Campaign Medal and the Global War on Terrorism Service Medal. He served in Operation Desert Storm in Kuwait, and in Operation Enduring Freedom, in Afghanistan. He was a longtime member of the Brookston Baptist Church.

Norman was preceded in death by his wife Patsy on January 10, 2009. He was also preceded by two brothers, Dorvel Nicholson, Jr. and Thomas Nicholson; and a granddaughter, Destiny Adkins.

To order memorial trees or send flowers to the family in memory of Norman Nicholson, please visit our flower store.