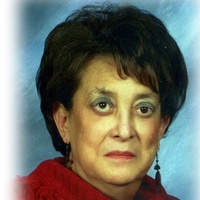 The family will greet friends at the church for one hour prior to the service.

Pam was born January 15, 1949, a daughter of James and Peggy Guthrie. She grew up in a loving family and graduated from Paris High School in 1967. She attended business school in Dallas and East Texas State University in Commerce. After raising her family, she became a bookkeeper. Pam was true to her faith and spent her time volunteering with Co-ministry and CASA, and was affiliated with First United Methodist Women, and Models of the Maker. She was also an enthusiastic member of the Red Hat Society, Prime Time, Auxiliary, and AARP. She enjoyed cooking and loved to crochet, particularly baby blankets for expectant mothers. Her spare time revolved around her children, grandchildren, and great grandchild.

She was preceded in death by parents Jimmy and Peggy Guthrie and her husband Larry Pruett.

Those who will most cherish her memory are her son James Nicholson, wife Anne and their new daughter Sophie, whom Pam was unable to meet, of Pearland, TX; daughter Rebecca Clive and her husband George of Little Elm, TX, their children Britney Cave and Brandon Cave of Lewisville, TX, Jessica Clive and Devin Clive, both of Little Elm, TX, and great-granddaughter Joslyn Dominguez of Little Elm, TX; sister Sandra Parton, her husband Leon of Dallas, TX, and their daughter Hilary Parton of New York, NY. Also left behind are her cousin Melissa Jumper and family and Pam's first husband Joe Nicholson.

To order memorial trees or send flowers to the family in memory of Pam Pruett, please visit our flower store.