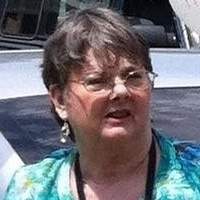 PATRICIA NELL (PATTI-CAKE) MAHAN, 67, of the Tigertown community, danced through the gates of Heaven to join her soulmate hand-in-hand on Sunday February 28, 2016 in Truett Hospital of Baylor Medical Center of Dallas. Her family will host a celebration in honor of her life from 5:30 PM to 7:00 PM on Thursday March 3, 2015 at Starrett Funeral Home. The non-formal time of remembrance will honor her memory and good name, and give opportunity for family and friends to share memories and stories for future generations.

Patricia was born March 17, 1948 in Lamar County, a daughter of James Melvin and Jimmie Lorayne Rives Black. She was a graduate of West Lamar High School. She worked for a number of years for Norment & Castleberry Insurance (now Norment & Landers), and for the Pierson & Fendley Insurance Agency. She later managed the Mahan Store at Lamar Point, then worked for seventeen years for the Texas Attorney General's Office in Paris. She had the heart of an artist, and enjoyed crochet and painting.

She married her best friend and soulmate Robert Kimmer Mahan on December 16, 1967, and he preceded her in death on September 20, 1996. Since that date he has spent the past twenty years "Waitin' on a Woman." Finally they are reunited and rejoicing, never to be apart again.

In addition to her beloved companion Kimmer, she was preceded in death by her parents, and one brother, Jim Black.

Patricia's family was of utmost importance in her life, and she never ceased to care for each of them in her own special way. Of all life's lessons learned, the greatest was her ability to forgive and forget. Her smile will be in the hearts of those she loved and her peace will calm the waters for her family, even in her absence.

To order memorial trees or send flowers to the family in memory of Patricia Nell "Patti-Cake", please visit our flower store.