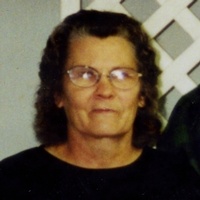 PATSY SUE GILBERT, 70, of Paris, left this life to be with her Lord on Sunday June 30, 2013 at Paris Regional Medical Center. Starrett Funeral Home will conduct funeral services at 2:00 p.m. Wednesday July 3, 2013 at the Pathway International Church of God, with Rev. Sam Evers, Rev. Ray Evers and Rev. Troy Drake officiating. Burial will follow in the Chicota Presbyterian Cemetery. The body will lie in repose at the church for one hour prior to the service.

The family will receive friends from 6:00 7:00 p.m. Tuesday at Pathway Church of God.

Patsy was born March 22, 1943 in Chicota, a daughter of Buster and Opal Vanderburg. She attended Chicota schools, and worked as a cook for Walker's Caf in Powderly for over thirteen years prior to her retirement. She was a longtime faithful member of the Pathway Church of God.

To order memorial trees or send flowers to the family in memory of Patsy Sue Gilbert, please visit our flower store.