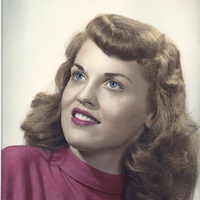 Peggy J Rodgers Broussard Brunette, 39 and some odd years, passed away surrounded by her family early Saturday morning, Feb. 28, 2015.
Graveside services were held Wednesday, March 4, 2015 at 1 p.m. at Magnolia Cemetery in Woodville. Officiated by Dr. Raymond A. Parker.
We will continue to celebrate Peggy's life on Saturday, March 7, in Paris with a memorial service at Immanuel Baptist Church on Bonham St. under the direction of Starrett Funeral Home with Pastor Eric Moore officiating. There will be a lunch served for family and friends by the church at 12 noon with the memorial immediately following at 1pm.
Peggy was born on Oct 23, 1930 (pretend you can't do math and figure out her above listed age might be just a little off) in Oklahoma City, Oklahoma. She was the daughter of Clarence A. Rodgers and Ruby Lee Bowman Rodgers. Luckily, her parents came to their right minds and headed back to Texas with their beautiful blue eyed baby girl and her older brother, Clarence and sister, Rosebud. There would be two more brothers, Rodney and Bob, added to the family later. Peggy grew up in Paris, TX, first on Austin St. then moved over to Bonham St, where her family lived for many years. She regaled us with the wonderful adventures of growing up in west Paris in the 30's and 40's. We could just picture her playing chalk chase all over town, staging fake fights with the West Paris gang until the police came and everyone scurried away, singing in the Baptist church, and sneaking out the big front bedroom window to have an innocent late night rendezvous with one of her many suitors. In 1952, on a double date with another boyfriend, she met the first love of her life, Guy T. Broussard, and three months later they ran off to Hope, AR and were married (well, she did have her momma's permission). Guy and Peggy had a fun time in their early years together while Guy finished college and Peggy worked as a Southwestern Bell operator. Later they had 3 little Broussard's and continued to have fun. Around 1971, they moved to Woodville, TX where Guy taught school and coached and Peggy worked as a teacher's aide and later as the junior high librarian. Peggy carried over her high school cheerleader days into her role as wife to a coach and mother to a couple of sports nuts. It was here that Guy preceded her in death in December 1977. Peggy remained in Woodville and in July 1981 she married her second love, Philip D. Brunette. Upon retirement, Peggy and Philip loved to go antiquing and to bluegrass festivals. Unfortunately, Philip also preceded her in death in 1997. After 32 years in Woodville, Peggy decided, in 2004, to move back to Paris to be closer to family. In these past 11 years, she had enjoyed being surrounded by nieces, nephews, cousins and old school and church friends. Peggy is survived by her son Kelly Broussard, daughters Karla and Kriste Broussard, stepdaughters Marian Romere and Marsha Gosney, grandsons Lee Broussard and David Toole, granddaughter Lindsey Gilfillian; many nieces, nephews, cousins and extended family. Preceded in death by just way too many, who she is currently having a fabulous party with in Heaven.
We will remember her smile, her warmth, her energy, her love for life, family and friends, but also her deep faith in God and the direction he had for her life. She made a difference in the lives of many and was truly a gift from God on this earth for 39 and some odd years (ok, it's really 84, but don't tell her I told).
In lieu of flowers, donations may be sent to the Lamar County Humane Association, 310 Clement Rd, Paris, TX 75460.

To order memorial trees or send flowers to the family in memory of Peggy J Brunette, please visit our flower store.