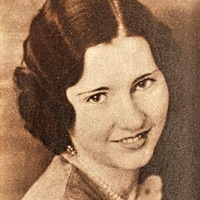 Born in the Givens community of Paris, Texas to Lewis Elmer Reed and Vie Anna Reed in December 1914 amidst the dear hearts and gentle people of Lamar County. She was raised a country girl in humble Christian surroundings where honesty, integrity, doing the right thing when no one is looking and respect for one's fellow man was highly valued and expected.

Prentice attended the Amherst school and graduated from Paris High School. She married D. T. Jumper in Paris in 1932 and moved to Waco, Texas that year where she remained until her death. They celebrated 65 years of marriage prior to D. T.'s death in 1997. The death in infancy of their first child, Connie Jean, was a loss carried to their graves.

In her almost 102 years she lived through the presidencies of 17 presidents, through the 1929 depression, suffering the same lasting hardships as the rest of the country. She lived through WWI, brothers in WWII, Pearl Harbor, the Korean War, assassination of President Kennedy, having a son in Vietnam, 9/11 and all the world strife since.

Her generation, the aptly named "Greatest Generation" framed the underpinning of, worked towards and lived through what is arguably the greatest advance in civilization in history, literally transitioning from the horse and buggy to the moon, leaving a legacy that will be difficult to match.

Prentice worked at Crawford Austin Manufacturing several years during WWII making military canvas equipment for the war effort. Following this she was employed at General Tire and Rubber Company in the bead room for 26 years working shift work.

Her children remember that she was kind and often fed hungry strangers who came to the back door in hard times in the 40's and 50's and befriended elderly friends taking them food and clothing.

She loved cooking and baking and made the best scratch biscuits, salmon croquets, pecan pie and chocolate chip cookies in the world, among dozens of other foods and meals.

She also loved fishing, particularly in the Gulf. She excelled at gardening and canning fruits and vegetables. She was very proud to have the very first microwave oven in Waco installed in a new home in 1957. That was a marvel because friends would come to see it cook bacon in a paper plate and a potato in five minutes.

Travel was something Prentice and D. T. enjoyed, having traveled in a pickup and camper to Alaska and back, to California. They took a European, month and a half-long tour crisscrossing the continent via a Euro- Rail pass.

In the last months of her life in a nursing home facility her family discovered that she had become quite the "social butterfly", as one administrator described her and had been widely loved for her heart-felt kindness to others (typically calling everyone either "Hon" or "dear" as they tended to her needs). Several facility nurses laughed as they related to family some of the humorous and witty things she said routinely revealing a hidden sense of humor appreciated by staff.

One incident revealed the persistence and grit always just under the surface as she won nine of ten (in a row) wheel chair races at the nursing home but was upset that she lost the tenth. When one aid told her, "But you won the first nine", she replied, "If you are going to race you should win!"

Perhaps the most notable traits and fondly held motherly influences she had' as remembered by her children, include the many, many admonitions passed along that became the "wee small voice in our heads", urging them to be fair, honest, kind, trustworthy, gentle, patient, persistent, courteous, clean and reverent (essentially all that is listed in the Boy Scout Oath). She will never know how those admonitions changed, shaped and determined better outcomes with her offspring.

Never was there a better mother. She will be missed.

Her deep Christian faith on which she depended comforted her in life and to the end.

In lieu of flowers, the family respectfully asks that donations be made to Providence Cemetery Fund, C/O Paul Darnell, 501 County Rd. 42400, Paris, Texas 75462. This is a small country cemetery and it receives little financial support for maintenance and upkeep.

To order memorial trees or send flowers to the family in memory of Prentice Eudell Jumper, please visit our flower store.