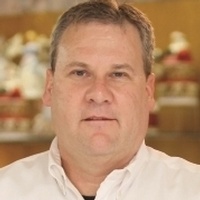 Randy was born June 27, 1960 in Paris, the son of Gene and Dorothy Hendley Rader. He was a graduate of Paris High School and trained for his profession at the Institute of Jewelry Technology at Paris Junior College. He was a faithful member of First Baptist Church of Paris and served as a director of his Sunday School Class. Randy loved to play guitar, having been active in a band called "Outlaw Blues," enjoyed the game of golf, scuba diving, and traveling with his family. Of all the things that life can bring, he enjoyed diamonds best. Life's experiences taught him that the things of earth, however, are only borrowed, and he spent a lifetime laying up treasures in Heaven through his devotion to his faith. He was known for his kind heart and hard work ethic. Everyone who knew Randy knew of his ability to stretch dollars and pinch pennies.

He had a true entrepreneurial spirit, taking on the legacy of his family name in the ownership and operation of the legendary jewelry and bridal business known as Gene the Jeweler. He was guided by his father Gene, who was known throughout the region as "The Cut Price King," and his mother Dorothy, who was the true heart of the family business founded in 1953. Under Randy's resourceful eye, he watched as it became the largest Jeweler in Northeast Texas. He was founding owner of Rock Rader Properties, finding success in property management.

He married the former Jana Garrison on July 12, 2005, in Paris. Randy always said that the third time was the charm.

He was preceded in death by his parents, Gene and Dorothy Rader.

To order memorial trees or send flowers to the family in memory of Randy Gene Rader, please visit our flower store.