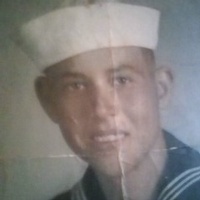 RAYMOND LINCOLN EASLEY, 87, of Paris, passed from this life Wednesday April 24, 2013 at Stillhouse Nursing and Rehabilitation Center. Funeral services will be conducted at 2:00 p.m. Saturday April 27, 2013 in the chapel of Starrett Funeral Home, with Rev. Tim Overby officiating. Interment will follow in the Mt. Tabor Cemetery.

Raymond was born February 9, 1926 in the Caviness community of Lamar County, a son of Anderson P. and Susie White Easley. He attended Lamar County schools, then entered the U.S. Navy, where he served his country honorably during WWII. He left Naval service in January, 1946 with the rank of Seaman Second Class. He was awarded the Victory Medal and The Asiatic-Pacific Area Campaign Medal. He was a member of the Graham Street Baptist Church.

Raymond was a man of God, and spent much time reading the Bible and giving testimony of his faith to others. He was well-known in the community as "the Candyman" and the "Whirleybird man." He never met a stranger, and greeted everyone who crossed his path. His family was first and foremost in his mind, and he showed constant care and love to each member.

He leaves to honor his memory seven children, Judy Frazier and Danny Easley and wife JoNell, and Sherry Easley, all of Paris, Keith Easley and wife Deanna, of Midland, Jane Mackey and husband Brent and Shelia Field and husband Randy, all of Lubbock and Juron Grady Easley, of Paris; twenty grandchildren; twenty-five great-grandchildren; and a host of extended family and friends.

To order memorial trees or send flowers to the family in memory of Raymond Lincoln Easley, please visit our flower store.