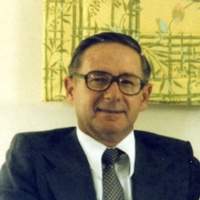 RAYMOND DEE MURR, 83, of Paris, Texas, passed from this life Tuesday September 16, 2014 at Dubuis Hospital in Paris. Cremation arrangements were provided by Starrett Funeral Home, where a memorial service will be conducted at 11:00 a.m. on Saturday September 27, 2014. He will be interred among his loved ones in Kingston, Oklahoma at a later date.

He was born August 5, 1931 in Kingston, Oklahoma, a son of Lawrence Chester (Ted) and Jewell Davis Murr. A graduate of Oklahoma schools, he received a degree from the University of Oklahoma in Petroleum Engineering. He had a successful career as a Branch Chief with the Federal Energy Regulatory Commission. Raymond served his country honorably in the U.S. Air Force, achieving the rank of Staff Sergeant. During his military career he made many lifelong friends, many of which he enjoyed seeing at reunions throughout the country as he, his wife, and their pets traveled by R.V. His keen mind and technical abilities made him a consummate "do-it-yourself-er," and he enjoyed these abilities for the benefit of family and friends. He was a sports fan and avid golfer, and loved to watch old Westerns. He was a staunch member and supporter of the N.R.A., had a firm belief in the rights and freedoms of all Americans.

He married the love of his life, Imo Jean McAdoo in 1953 in Tampa,Florida, and together they spent a lifetime of love, service, and commitment. Life brought hope and success, but their lives were tendered a tragic loss with the death of their precious daughter Susan Leslie Murr. The painful lessons learned on the dark road of grief and loss presented a clear choice: that of becoming bitter, or better. Choosing the latter, they became intensively involved with Compassionate Friends, an organization dedicated to helping those who have lost children to death. They were instrumental in establishing a Chapter of Friends for parents who have lost their only, or all of their children, once again sharing lessons taught by deep, personal grief with other parents in similar pain.

To order memorial trees or send flowers to the family in memory of Raymond Dee Murr, please visit our flower store.