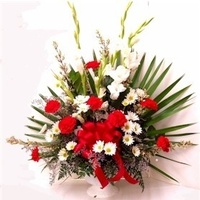 RICHARD L. HUFF, 88, of Paris, Texas passed from this life Wednesday January 19, 2011 at Paris Regional Medical Center. Following cremation arrangements by Starrett Funeral Home, he will be laid to rest at a later date in the Sunset Memorial Gardens, Rockford, Illinois, next to his beloved wife.

Mr. Huff was born August 31, 1922 in Cerro Gordo, Illinois, a son of William Harrison and Faye Reynolds Huff. He was a graduate of Pampa, Texas schools, then entered the U.S. Army, serving during World War II. He was a member of the Church of Christ. He retired from manufacturing, working as a Foreman for the National Lock Company. He was a member of the American Legion and Veterans of Foreign Wars, and for many years was an active volunteer at the V.A. Hospital, Bonham, Texas.

Richard married Charlsey Farmer in Rockford, Illinois, who preceded him in death in 1983.

In addition to his wife he was preceded in death by a great-grandson, Austin Buckaloo; by a brother, William Huff; and a sister, Grace Ebert.

To order memorial trees or send flowers to the family in memory of Richard L Huff, please visit our flower store.