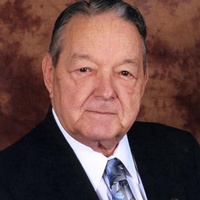 The family will receive friends from 6:00 to 7:00 p.m. Thursday at the funeral home.

Richard was born September 18, 1928 in Roxton, a son of Paul M. and Margaret Ann Williams Margraves. He graduated from Paris High School and Paris Junior College, then completed a degree in Pharmacy at the University of Houston. He served his country in the U.S. Navy during the Korean conflict as a Pharmacist Mate. Following the war he joined his father in the family business, Margraves Drug, which had opened in 1951. He also owned and operated Corner Drugs, Paris East Pharmacy. When the new McCuistion Hospital was completed, he opened the Pavilion Pharmacy in 1969. Richard helped form the first Paris High School Booster Club and was a former director of the Paris Boys Club. He is a 32nd degree Mason, and a former member of the Paris Kiwanis Club. Richard was named to the board of directors of First Federal Community Bank in 1958, who honored him for fifty years of service in 2008. He was a member of Church of the Holy Cross Episcopal, formerly serving as a Vestryman.

On December 27, 1951, he married the love of his life, Betty Shipman, and together they shared sixty years. He recently said to Betty, "We have had such a wonderful, blessed life together all these years. We did it right!"

In addition to his parents he was preceded in death by a sister, Margaret Ann Caldwell.

He leaves to cherish his memory his wife Betty, of the home; a son, Stephen Margraves, of Paris; two brothers-in-law, Robert Leslie Shipman, of Oklahoma City and Bill Shipman, of Smithfield; a sister-in-law, Linnie Locke, of Bethany, Oklahoma; two cousins, Ross Margraves, of Houston and Nancy Hoover, of Austin; a step-brother, Dennis Frank, of Blossom; numerous nieces and nephews, and a host of friends.

To order memorial trees or send flowers to the family in memory of Richard Murry Margraves, please visit our flower store.