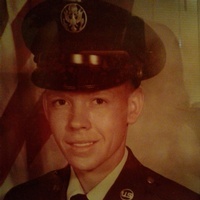 Robert Monroe McDonald, 58, of Paris passed away at his home Saturday, August 4, 2018,
surrounded by family and friends. Funeral arrangements will be provided by Roden-Pryor Funeral Directors, with family visitation to be held Friday, August 10 from 6 to 8 P M. Funeral services will be conducted Saturday at 2 P. M. In the Gene Roden Memorial Chapel with Dr. Ed Shaeffer officiating. Interment with military honors will follow at Meadowbrook Gardens. Serving as pallbearers are Clifton Graber, Robert Graber, and four young men who came into Robert and Colleen's home when they needed a home away from home: Tyler Finney, Joey Maroney, Charles Clausen, and Jack Bannister. Serving as honorary pallbearers are Chase Sweat and Jose Rios.

Robert was born October 1, 1959, in Paris to William Mc Donald and Glena Love McDonald. Robert attended Paris schools, graduating from Paris High School in 1979. After high school, Robert joined the Air Force, wanting to learn a skill. He worked As an aircraft electrician at Carlswell AFB as part of SAC. After his military service, he continued to serve his country at defense contractors LTV, Lockheed-Martin, And E Systems. He later worked as a truck driver for Red River Transport and most recently worked at Delek Refinery as a hazardous materials driver
transporting liquid propane, or as he called it, "dynamite on wheels."

Robert was known for his kind and generous nature, for his devotion to family and friends, and for his dedication to hard work. This happy-go-lucky man's idea of a grand vacation was "drankin' some beer and goin' fishn'," and he was looking forward to an extra week of vacation this year! He fought hard until the very end, insisting that he didn't want us "cryin' and carryin' on."

Special thanks to Platinum Hospice Care; Teresa, Clifton, and Robert Graber; and Tina Sweat, who supported Colleen and the family in these last days. Not to be left out of the family are the menagerie of pets, including dogs, cats, and a ferret, who will miss their daddy.

In lieu of usual rememberances, Robert requested donations be made to the American Cancer Society.

To order memorial trees or send flowers to the family in memory of Robert Monroe McDonald, please visit our flower store.