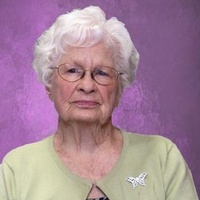 RUTH JANE KROPP, 91, our beloved Mother, Grandmother, Sister, Aunt and friend was delivered into the hands of her heavenly father on October 20, 2013. Funeral services will be conducted under the direction of Marcus Roden and the Starrett Funeral Home staff at 11:00 a.m. Thursday Oct. 24, 2013 at Emberson Baptist Church in Sumner with Dr. Gary R. Reed officiating. Interment will follow in Mt. Tabor Cemetery.
The family will receive friends from 6-8 p.m. on Wednesday, Oct. 23, at Starrett Funeral Home.

Mrs. Kropp was born March 10, 1922 in Arthur City to Maud Vernon and Dulsie McEntyre Slagle. She retired from Southwestern Bell Telephone Co. in 1980 after 35 years of service. She was a faithful servant of God and a living testimony unto her family and friends. Mrs. Kropp was a member of Emberson Baptist Church in Sumner and her calling of service to the Lord came as a lifelong Sunday School Teacher.

Ruth was preceded in death by her parents; her spouse of a lifetime Clifton Harding Kropp; her sisters, Johnnie Border, Dorothy Tollson, Laverne Jones, and Charlene Slagle; her brother, Kenny Slagle; and a great granddaughter, Savannah Ruth Paul.

For those desiring, memorials may be made to the Emberson Baptist Church, 6877 FM 1499, Sumner, TX 75486. Friends may register in Ruth's Book of Memories at www.starrettfunerals.com .

To order memorial trees or send flowers to the family in memory of Ruth Kropp, please visit our flower store.