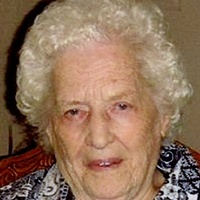 The family will receive friends from 2:00 to 3:00 Sunday afternoon at the funeral home.

Sarah was born September 30, 1920 in Powderly, a daughter of William and Lily Mae Couch Briscoe. She was a retired nurse, and also retired from Campbells Soup Company. For some twenty-four years she was a member of the Immanuel Baptist Church. She often referred to herself as "The Stubborn Irishman," but her strength and tenacity was best exemplified in the care and love she showed for her family, and the care of her husband through an illness of forty-two years. She will be remembered as an avid fisherman, gardener and lover of flowers and as a wonderful cook, but most of all for her devotion to her children and attention to her grandchildren, who, in her eyes, could do no wrong.

She married Oscar Martin on December 2, 1941 in Clarksville, and together they shared forty-seven years until his death on November 10, 1988.

In addition to Oscar she was preceded in death by a son, Harold Martin, and by two brothers and four sisters.

To order memorial trees or send flowers to the family in memory of Sarah Martin, please visit our flower store.