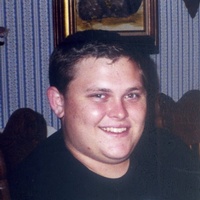 
Thad was born November 13, 1980 in Paris, a son of Roy E. and Patti Marie King Gwinn. He attended North Lamar schools, The Christian Academy and Pathway Academy, and owned and operated a concessions company. He loved NASCAR and attended every event possible. He was an avid fisherman, but always chose to catch and release. As a child he played Optimist Baseball, then spent many hours in adulthood working at Woodall Field. His love for his family and giving heart were obvious to all who crossed his path.


Thad was preceded in death by his paternal grandparents, Homer and Maurine Gwinn; his maternal grandfather, Odis Y. King; and by an aunt, Rozanne Garrett.

He is survived by his wife, Christy Renee' Gwinn, of Paris; his parents, Roy and Patti Gwinn, of Hopewell; a brother, Tim Gwinn, of Houston; his maternal grandmother, Mildred Irene Robinson King, of Reno; by numerous aunts, uncles, cousins and friends; and by his beloved canine companion Buddy.


To order memorial trees or send flowers to the family in memory of Thad Gwinn, please visit our flower store.