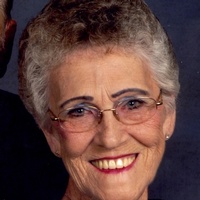 WANDA ANN JONES ARCHER, aka Grandma', 75, of Faught, passed away surrounded by family at Baylor University Medical Center in Dallas on Saturday July 5, 2014. Funeral services will be conducted at 11:00 a.m. Tuesday July 8, 2014 in the chapel of Starrett Funeral Home, with Rev. Bill Dickey officiating. Interment will follow in Meadowbrook Gardens.

Wanda was born in Jennings to Otto and Hazel Dockery Jones on March 1, 1939. She married TSgt Tillman J Archer on Feburary 22, 1955, and traveled the world to Europe, Africa, and all over the United States. She was a woman of many traits, enjoyed many things, but her most prized possession was her family. She was preceded in death by her parents; her beloved husband Tillman; a daughter, Linda Archer; sisters, Shirley Pate, and Mary Lollar and husband, Jerry; brother, Charles Jones, and a brother-in-law, Lloyd Frazier.

To order memorial trees or send flowers to the family in memory of Wanda Ann Archer, please visit our flower store.