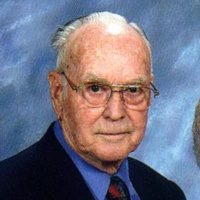 The family will receive friends from 7:00 to 8:00 p.m. Wednesday at the funeral home.

Mr. McFadden was born January 26, 1925 in the Center Grove Community, a son of A.W. and Elvina Wells McFadden. He was a veteran of the U.S. Navy, serving his country from 1944 to 1946. He was a member and past Elder of the Lamar Avenue Church of Christ, where he also led the jail ministry at the Lamar County Jail. He was a retired Dairyman.

He was preceded in death by a granddaughter, Jennifer McFadden; by two brothers, Virgil and Roy McFadden; and by two sisters, Winnie Conway and Aileen Adams.

To order memorial trees or send flowers to the family in memory of Wayne E McFadden, please visit our flower store.