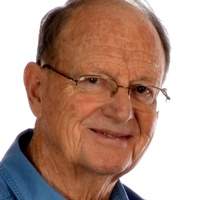 William Hillyard Logee was born March 21, 1925, in Cleveland, Ohio, to Dwight Francis and Ellen Hillyard Logee. Although the family moved around a lot during his early years he attended High School in Charles City, Iowa, where he graduated in 1943. He served in the United States Infantry during World War II, then attended Cornell College in Mount Vernon, Iowa. He is a graduate of Northern Illinois College of Optometry in Chicago. Following his education he practiced Optometry in Ft. Worth, then came to Paris in 1955, where he practiced for over fifty years.

He was blessed with a fine tenor voice, and began performing at an early age. He was active in the Fort Worth Civic Opera before coming to Paris. Here, he was active in the Community Chorus, the Madrigal Singers, and for many years, in a barbershop quartet who called themselves "The Fo-Pas" of which he was the last surviving member. He was called upon to sing for many public occasions, at Municipal Band performances, at service clubs, and at countless weddings and funerals. He performed in a number of Community Theatre productions, including "1776,""How To Succeed In Business," "Annie,""Brigadoon," "Annie Get Your Gun," "Joseph and the Amazing Technicolor Dream Coat," and "The Music Man."

Dr. Logee was active in First United Methodist Church, especially in the Choir, where he sang each Sunday. During several periods he served as Choir Director. He also taught Sunday School for over forty years. He held many offices and served the church in many capacities over the years.

After his retirement, he worked in the P.J.C. Literacy program at the Lamar County Jail, served on the CHANCE Board and the Pregnancy Center board, as well as at Christians in Action. Through RSVP he tutored several Elementary pupils, and read to Second Graders.

His "hobby", or avocation, was the pecan farm he and his wife, Jane, established at Garrett's Bluff. They named it "Jubal Orchard". Jubal, a grandson of Noah, was said to be the father of all the musicians, and, all four of their children are musical. This orchard produces thousands of pounds of pecans each year.

Bill married Jane Killingsworth on June 2, 1949 in the First Methodist Church of Fort Worth. Together they shared over sixty-four years of making a family, sharing their love, and leaving sweet memories to all who knew him.

He was preceded in death by his parents; and by one sister, Laura Jane Logee Duncan.

To order memorial trees or send flowers to the family in memory of William Hillyard "Bill" Logee, please visit our flower store.